"Air Line" or The Unchosen Motif

"Air Line" or The Unchosen Motif

The Dutch word "onverkoren" is a fictive, ambiguous term. It can mean both "not selected" and "not chosen." Motifs not selected are motifs I came upon by chance. I am a painter who works outdoors, "in front of the motif." My search for motifs in nature or in the city is influenced by the usual notion of what a "nice" motif is, a motif worth painting. As a result, I am constantly engaged in classifying things in my field of vision.

A motif is often selected in a fortunate moment of inability. Renoir once said that he spent a long time arranging a bouquet for a nice still life. He did this so extensively that, in the end, he couldn’t decide on one of the many solutions. In his despair, he placed the arrangement on its back and painted the flowers the way they showed themselves. At times, I also turn around in a landscape and paint it the way it shows itself.

Motifs not selected are motifs without an own tradition in painting. This non-picturesque custom does have its own history, though. At the turn of the 18th to the 19th century, a big change occurred in the selection of motifs as well as in the style of composition. It was a time in which artists began painting “outdoors” in small formats with oil or gouache colors. Motifs that were hitherto deemed unsightly, for example, a plank across a canal, empty walls, roofs, or a casual view from a window, were painted by, among others, Thomas Jones (1742-1803), Pierre-Henri de Valenciennes (1750-1819), and the painters of the “Danish Golden Century” in the first half of the 19th century (e.g., Christen Købke (1810-1848) and Johan Thomas Lundbye (1818-1848)). With the painters of this period, one can still discern a great difference between the pictures painted after nature, which were usually small-format with quasi-accidental, banal motifs drawn from everyday life, and the official works produced for exhibitions, large formats depicting historical motifs or idealized landscapes. In the period of Impressionism, the unsightly motifs then came to the fore. The painters of “modern life” (Baudelaire) preferred selecting fleeting subjects such as street scenes or the change of light. Impressionist painting is now generally accepted and deemed picturesque. But the painting and drawing of contemporary life continues to evolve.

People watching me as I paint outdoors, however, usually see this differently. When painting a street with high-rises on the fringes of a city, a woman on a bike sullenly approached me. Riding by she said: "You’re looking in the wrong direction. Over there is where it’s nice." She pointed to a meadow with canals and a mill, which I had turned my back to. In other cultures, as well, people tend to react in this way. When I was in Damascus, Syria, painting a modern traffic junction, a passer-by indignantly said: “Why are you painting here? This could be anywhere! Why don’t you paint the Umayyad Mosque in the Old City?” Generally, there is a limited conception of what is nice and what not. Moreover, a painter is Argus-eyed because he or she applies a stamp of quality to the landscape. The stamp is the “proof” of it being nice.

In the project, "Vogelvlucht (Luftlinie / Air Line)" both aspects of the unchosen motif were employed. The project evolved during a stay at the "Gastatelier Höherweg" in Düsseldorf. On the map of Düsseldorf, I drew a line from my studio located in a 19th-century industrial zone to the castle tower, the most famous tourist sight of the medieval old city. Wherever the line intersected with a square or a street, I drew the surroundings on site in such a way that my view was directed to the drawn line. I thus came upon twenty stops in a distance of around four kilometers. I drew and painted in a completely objective manner. The main attention of the quasi-documentary pictures is on the motifs, while the persona of the artist remains in the background. 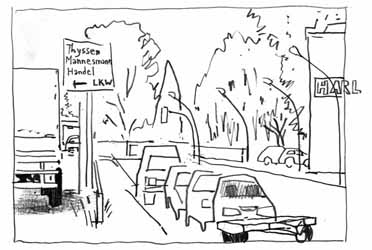 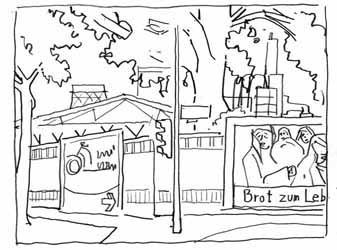 So, the locations were dictated to me by the lines. These are places I never would have selected: the car stores along the "Car Mile," boring streets like the Engelbertstraße or Hubbelrather Straße, where all ornaments stemming from the late 18th century have been removed from the gables, or the parking lot behind the musical theater, "Capitol." All of these forgotten motifs are nonexistent in the picturesque tradition. As was the case in the Netherlands and in Syria, the astonishment in the urban fringe districts of Germany was huge. People reacted in a combination of almost-outrage (“What are you doing here?”) and pride, since I, as a painter, selected their neighborhood as a motif.

The project presents a view of the city that totally differs from standard geography, which distinguishes between main and side streets. It is a cross-section of time, and this cross-section simultaneously depicts the city the way it actually shows itself: with streetlamps, the demolition of gables—which is so characteristic of Germany—, parking lots, a mattress store, a new Richard Meier store, traffic lights, McDonald’s, and finally the castle tower.